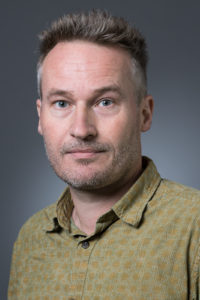 My research interest is the relation between technical communication media and the social. In these years my main focus is on the digitalisation of society and especially in relation to social media. I am both interested in the medium revolution in relation to school systems and in other organisational systems. But my empirical research is in education in the Danish upper secondary schools. I am part of three research projects where the documentation face is over in relation to the Socio Media Education experiment and the BIT-project and the DUFA-project. Together with Michale Paulsen I have published a number of books and papers about the research projects (see my publications).

Interview with me from May 2020: https://m.youtube.com/watch?v=YyWzQXTrrZs

The theory of the three waves.

The theory of the three waves describes the general patterns of how schools respond to the new conditions digital media implies compared to the media situation before the Internet. We propose that these responses imply a shift from closed classroom teaching to an open community between students, teachers and third parts. Yet, the shift does not happen at once. Rather we suggest that it arises through three waves containing different educational responses to the new situation. In Figure 1 we have outlined our narrative theory. On the Y-axis we have educational relevantattentionand on the X-axis we have time. In our theory we assume that before the digital media there was a given level of educational relevant attention. This assumption can be called into question insofar attention toward the educational relevant subject matter differed from student to student, class to class, time to time, etc. Yet, there is no doubt that what we generally observe in the first waveof digital media and wireless networks is a huge drop in educational relevant attention.  Also we know that activity irrelevant to the educational purposes (e.g. responding to private messages) significantly harm grade, recalling of information and note taking.

In our research from 2005-2015 we have observed that the first respond by teachers and schools to the new media situation is primarily either to ignorethe new difficulties and possibilities, or to prohibitthe use of digital media for educational irrelevant purposes. Both strategies – prohibition and ignorance – generally fail for several reasons (ibid). At the same time the new possibilities for teaching provided are not actualised or invented. In the first wave we consequently do not observe a realisation of new and improved teaching, but a destabilised teaching with students trying to multitask between computer games or social media and the educational interaction with teachers that do not know what to do.

The second wave arises when schools, teachers and students begins to make use of the possibilities of the new media for making better interaction between the students and the teachers. In this phase teachers begin to use the new media to draw attention back to the classroom by using digital based written interaction within the class and shared online documents where students collaborate monitored and guided by the teacher. The result is an intensified educational interaction where the attention is re-conquered and more and better possibilities of participationarise. For instance it becomes possible for teachers to get answers from allthe students simultaneouslythrough the use of microblogging media like Twitter, instead of only hearing one voice at a time. This – and similar uses – helps to get more students involved and engaged in the educational interaction. Despite the positive impact of the second wave it only consists of “more” and “better” interaction, not altering the classroom setting and the educational form radically. Yet the third wave– which is truly radical – is made possible by the digital literacy developed and prepared during the second wave.

The third wave arises when other persons than the students and the teachers through the Internet become integral parts of the educational interaction. When this happens on a regular basis it changes the educational form that has existed more or less since the printing press. Instead of a closed system of interaction between teachers and students we now observe an open system of interaction, in which other persons outside the classroom participate and contribute. This brings new perspectivesto the form of education. On regular basis students meet persons with other perspectives, views and responses and the teacher becomes a ‘mediator of otherness’. In this wave the teacher build networks for educational proposes outside the classroom. Students connect to groups, other school classes, individuals and databases using the new medium environment as a natural part of their education. They are taking part in the convergence culture doing produsage, learning to navigate and take part in the new society and its forms of production, network, communications and cultures. The upshot is that teaching shift from being a closed fabricto an open activity, inviting different people to participate. Instead of transmitting knowledge to the students the role of the teacher becomes to connect students with relevant otherness and make knowledge production possible across borders and differences.

In the first phase teachers and schools have to find middle ways in-between extreme versions of prohibitions and ignorance. This leads to the second phase: the use of digital media for educational purposes and what we call the “intensified classroom”. Yet it does not totally solve or repeal the distractions of the first wave, rather it deals with it more adequately. Further the digital skills, experiences and competences achieved through the second phase enableand motivate the class to enter the final and third wave, where other persons than the students and their teachers are contacted with the aim of contributing to the educational process. These alterations are both more practical and fundamental than shifts in learning theory. What we propose is not only a model of shifting learning theories and not only a theory of distance education pedagogy, but rather a general educational theory of how the practice of education as suchalters in the era of digital media, also accounting for the non-digital-elements of education.

Figure 1. The three waves of digital media in education 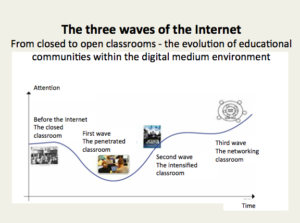 As part of our research leading to our theory of the three waves we have conducted a three year long action research project, the Socio Media Education (SME) experiment from 2011-2014. The empirical findings in this project enable us to go more into detail and outline more concretely each of the three waves, but also difficulties of moving from phase one to phase two and from phase two to the third. In that project we followed an upper secondary school class and designed the teaching of it together with its teachers to try to provide the teachers and students with some good media habits, a higher level of reflectivity in relation to media use and attention.

To read more see: Digitalisation of education : the theory of the three waves